BrokerNotes.co is committed to the highest ethical standards and reviews services independently. Learn How We Make Money
Home Education

The ForexBrokers.com annual forex broker review (six years running) is the most cited in the industry. With over 50,000 words of research across the site, we spend hundreds of hours testing forex brokers each year. Here's how we test.

The Forex market has been particularly active since the 1970s. It has become the world's largest financial market, with the average daily trading volume growing from around 1.2 trillion in 1995, to 5.1 trillion in 2016, according to figures from the Bank of International Settlements.

Although large financial institutions and banks are responsible for a substantial portion of trading in this market, modern technology has also made it accessible to a broader base of customers. Brokers have developed easy to use, online trading platforms that have simplified the process of trading, and made it available from almost anywhere in the world.

In fact, 9.6 million people around the world are now online traders: that's 1 in every 781 people.

Where are the world's online traders?

The industry is global, with many brokers obtaining permission from various regulators around the world, or taking advantage of passporting arrangements to promote their services in jurisdictions outside of their country of domicile.

Although the UK and US remain by far the largest centres of Forex trading activity, our modern trader report found that a third of online traders are based in Asia and the Middle East, which is over a million more than can be found in Europe and Northern America.

Online trading platforms have spread the focus away from the major financial centres, such as London and New York, and out to the far corners of the world. 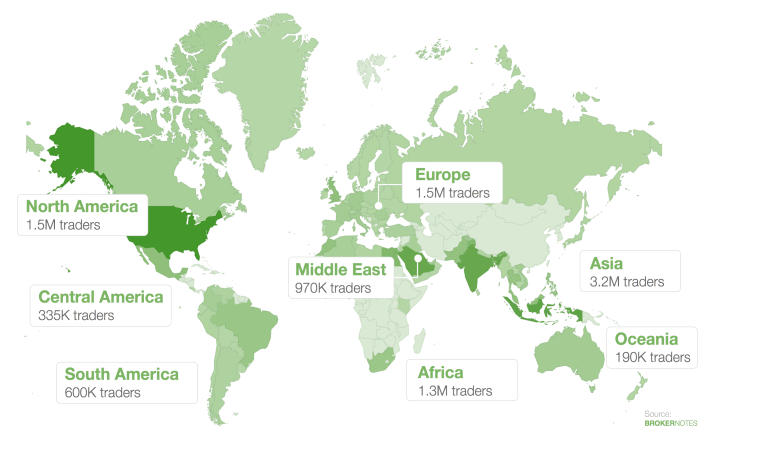 Number of online traders by continent / region. See Appendix A for raw data.

Nowadays, all that is required is an internet connection for would-be traders to begin participating in the Forex markets. Personal computers are not even necessary, as many of the platforms can be accessed from a mobile phone.

The figures are even more staggering when people who do not use the internet are removed from the equation: with 3.8 billion internet users in the world, that makes 1 in every 396 an online trader.

With 1.9 billion internet users, it is not surprising that the greatest number of online traders can be found in Asia, at 3.2 million. However, this means that a lower proportion of internet users are online traders than in any other region, equating to 1 in every 594 users.

Whereas in Africa, with 1.3 million online traders and only 388 million internet users, a high proportion of internet users trade online: 1 in every 298.

Remarkably, the proportion of online traders to internet users is the highest in the Middle East, with 1 in every 152 of the 147 million internet users trading online.

The Middle East and North Africa have the highest proportion of online traders, yet these regions are both predominantly populated by Muslims. Why this presents a problem for Forex trading is that Riba, or gains made from trading, are not permitted by Islamic law. Forex accounts that have transactions open beyond trading hours are subject to fees similar to interest charges, either debit or credit depending on the position the account is in when the market closes. However, this is seen as usurious, and therefore currency trading restrictions have been imposed to enable currency exchange to comply with Sharia law.

Many brokers have taken note of this and offer Islamic trading accounts. These accounts are not subject to interest, and buying and selling of currency is immediate. This enables Muslim traders to exchange foreign currency in accordance with their faith and could account for the high proportion of online traders in these regions.

Traders in the UK and Europe

In fact, there are more online traders in Britain, than in any other European country as our study shows. 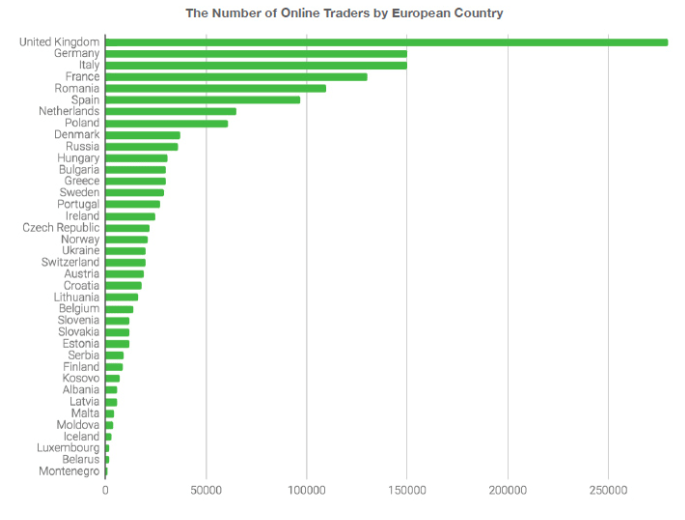 Number of online traders by European country - see Appendix B for raw data.

Why is trading so popular in the UK?

There have been some recent regulatory changes across Europe with regards to leveraged products, such as Forex and CFDs, which may be contributing to lower levels of traders registering for accounts. For example, in France and Holland, promotion of leveraged products is not permitted, and Belgium has banned leverage altogether. The Cyprus regulator, CySEC, have introduced controls whereby higher leverage is only available to customers who specifically request it and who can demonstrate their suitability and appropriateness.

In the UK, the Financial Conduct Authority (FCA) have consulted on tightening the controls around leverage, but have not yet enforced any changes. Traders in the UK could still be taking advantage of the fact that they can trade on margin, which means that they are able to magnify their exposure to currency movements using relatively small deposits. As over 50% of online of less than GBP 35,000, this can be particularly appealing.

Although the German regulator (BaFin) has only implemented changes around negative balance protection, so this does not explain why their volumes of online traders are only just over half of those in the UK.

What is clear, however, is that whilst trading has been opened up to a world of internet users, from a range of different backgrounds and faiths, for now the UK continues to be one of the central hubs for Forex trading.

Appendix A - The Number of Online Traders by Continent/Region

Appendix B - The Number of Online Traders by European Country 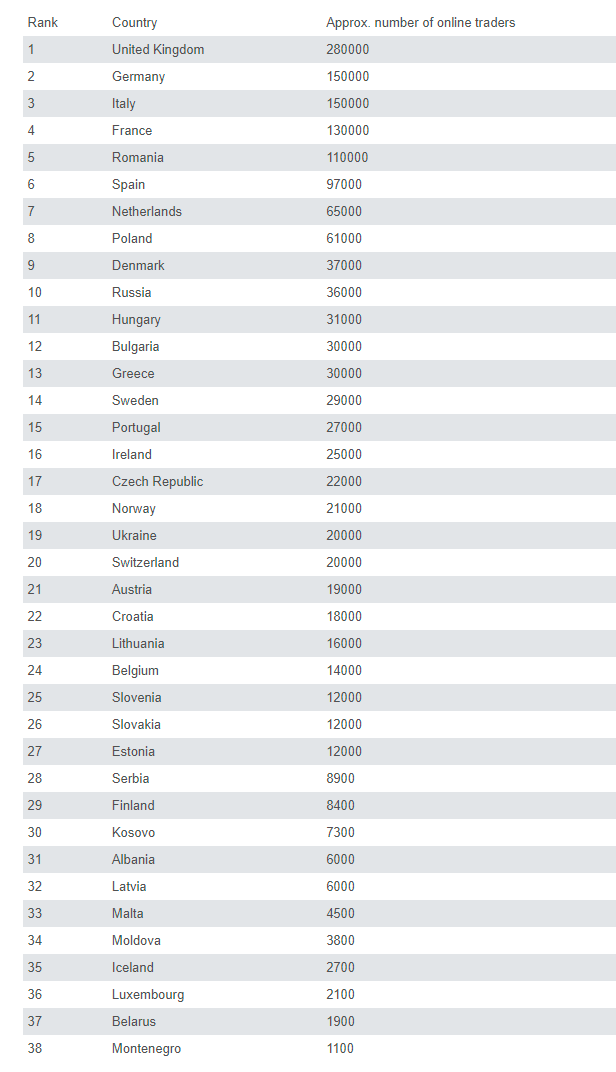 *13 European countries are not listed above as they have fewer than 1,000 traders

There is a very high degree of risk involved in trading securities. With respect to margin-based foreign exchange trading, off-exchange derivatives, and cryptocurrencies, there is considerable exposure to risk, including but not limited to, leverage, creditworthiness, limited regulatory protection and market volatility that may substantially affect the price, or liquidity of a currency or related instrument. It should not be assumed that the methods, techniques, or indicators presented in these products will be profitable, or that they will not result in losses. Learn more about foreign exchange risk.

About the Editorial Team


BrokerNotes was founded in 2014 by Marcus Taylor, founder and CEO of Venture Harbor, a venture studio in Oxford that develops innovative online tools & technology across a range of sectors.